TEAM Industrial Services is a world-wide leader in providing fully integrated industrial service solutions. The company's modern day achievements are built upon a proud legacy full of innovation, exceptional service and strong relationships. We are proud of our history and the companies that paved the path to creating a unified TEAM that provides the best services and products in the industry. 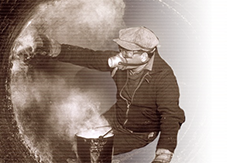 Eugene Clay Furman develops the under pressure Leak Sealing process at the Newport News Shipyard. Although the Leak Sealing process was invented to ensure steam-driven naval vessels could continue to operate without the need for stopping the vessel mid-voyage, Furman, its inventor, quickly appreciated the applications across other industries and formed a company to market the “leak-sealing kits” on a wider scale.  However, it was many years before advances in technology enabled leaks other than low-pressure (approximately 87 psi or 6 bar) steam to be successfully sealed on line. The first do-it-yourself Leak Sealing kits were developed and marketed by Clay Furman and while they worked as advertised, he struggled to find an audience that would listen to his revolutionary achievement.  Furman’s kits did not gain wide acknowledgement and acceptance until the US Navy reviewed their performance favorably in the “Bulletin of Engineering Information” November, 1926 edition following a series of practical evaluations on the USS Melville and the USS Memphis. 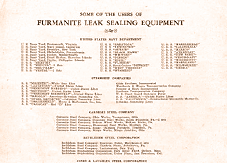 US customer reference list that includes individual war ships in the US Navy, US steel companies and other US industrial operations using the Furmanite Corporation Leak Sealing Kits. Several of these companies still exist, though as with Standard Oil under a different name, and remain customers of Team to this day. 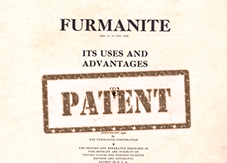 The leak sealing process patent filed in 1927 was the first such patent for this process and established Furmanite as the inventor and originator of the “Under Pressure Leak Sealing Process.” While similarities still exist to these first methods, leak-sealing process advancements enable Team’s technicians to seal virtually any type of leak without interruption. 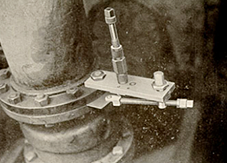 First overseas agents are appointed to market the leak-sealing kits including in the United Kingdom and Europe. 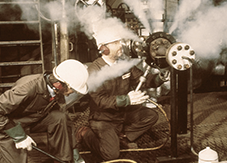 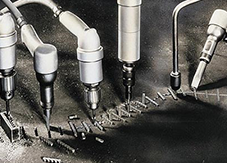 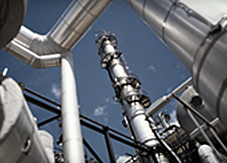 Alan Forsyth, acting as a consultant to Furmanite Engineering (1929) advised the Board to move from selling low pressure leak sealing kits into providing a leak sealing service as well as introduce other mechanical add-on service lines. Alan Forsyth can be regarded as the pioneer of today’s modern leak sealing industry. It was Alan that moved the company to “service” from selling a kit product, that drove the move to ever higher pressures and temperatures, that identified complimentary technologies such as on-site machining and controlled bolting, which expanded the service offering and allowed clients to entrust larger packages of work to a specialist company. 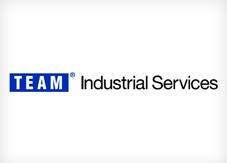 Team is founded as an on stream leak repair and hot tapping company. The Company began with five locations, 60 people and three service lines. TEAM is traded on the NYSE stock exchange (Symbol: TISI). 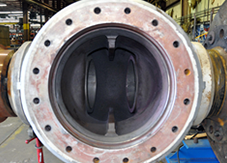 Furmanite as part of Xanser Corporation acquired the General Services Group (GSG) of Flow-Serve corporation in 2006 for approximately US $ 16 million in cash.

GSG was a single-source provider of maintenance, repair and distribution services for a broad array of valves, piping systems and other process-system components, with operating locations in North America and Europe. GSG had significant North American market share in third-party valve repair, as well as in third-party on-line services such as hot tapping and field machining. In 2004, GSG had net revenues in excess of $100 million. On June 1, 2007 TEAM Industrial Services, Inc. acquired Aitec, Inc and related companies, an NDT inspection services company that was headquartered near Toronto with 13 service locations across Canada, including large operations in Alberta and Ontario. This acquisition expanded TEAM’s inspection services into Canada. TEAM purchased Leak Repairs Specam (“LRS”), a specialty industrial services company from the GTI Group in the The Netherlands. GTI was an affiliate of the Suez Group. LRS, which is headquartered in Vlissingen, The Netherlands. LRS provided a range of services including on-stream leak sealing, hot tapping, fugitive emissions monitoring, field machining, and bolting services. This purchase provided TEAM with its initial operating presence in Europe — another exciting business growth opportunity for the company. 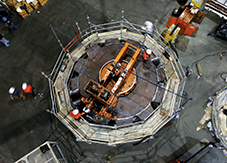 Furmanite expanded its global on-site machining capabilities through the acquisition of Self Leveling Machines Pty Ltd. and Self Leveling Machines, Inc. (collectively “SLM”), based in Melbourne, Australia, and Houston, Texas. SLM  provides large scale on-site machining with the capability to perform up to 100 foot plus diameter cuts at machine shop accuracy through its patented Self Leveling Technology. Today, Team SLM services provide engineering, fabrication and execution of highly-specialized machining solutions for large-scale equipment or operations Worldwide. On July 25, 2013, TEAM Industrial Services, Inc purchased Global Ascent, Inc., a leading provider of industrial rope access services. The purchase of Global Ascent added a range of basic and advanced NDE services and maintenance services in both the traditional manner and via rope access to TEAM’s service offerings. TEAM industrial Services, Inc expanded its valve servicing capabilities with the acquisition of acquired DK Amans Valve on June 1, 2015. For over 45 years DK Amans Valve has been effectively providing valve products and service solutions to some of the largest industries in the nation. On July 6, 2015, TEAM strengthened its existing inspection and heat treating business with the acquisition of Qualspec Group.